1. Were the 2 videos (Gore’s film and the Climate Hustle) in agreement with each other? Please elaborate (i.e. were there any differences)? Was there any agenda in either one or both films, if so please explain?
2. What was the “human engineering” example presented by a professor in the Climate Hustle film?
3. Global warming aka Climate Change as is popularly referenced in contemporary discussion today is basically based on one variable. What is that variable and how did each film approach it? Please give supporting examples.
4. Is it possible to tell, using scientific methods or historical accounts (or both) whether changes in climate are due to “human causes” (Anthroprogenic) or as a result of “natural variations”?
5. What do you feel most people that are asked the question of whether climate change is due to “natural cycles” or ”human causes” will respond? Why?
6. In the Climate Hustle video was there disagreement between scientists regarding climate change (as opposed to how this question was presented/answered in An Inconvenient Truth)?
7. Are all viewpoints treated evenly in this debate? Give specific examples from the videos to justify your answer.
8. The following is a look at historical anthropological as well as climatological temperature data, with research from the 1930s revealing some important findings about Greenland’s climate within the last roughly 1000 years:

In 2006 a professor from the University of Oklahoma (where I got my undergraduate degree) testified in D.C. about his personal experience following his research and publication: 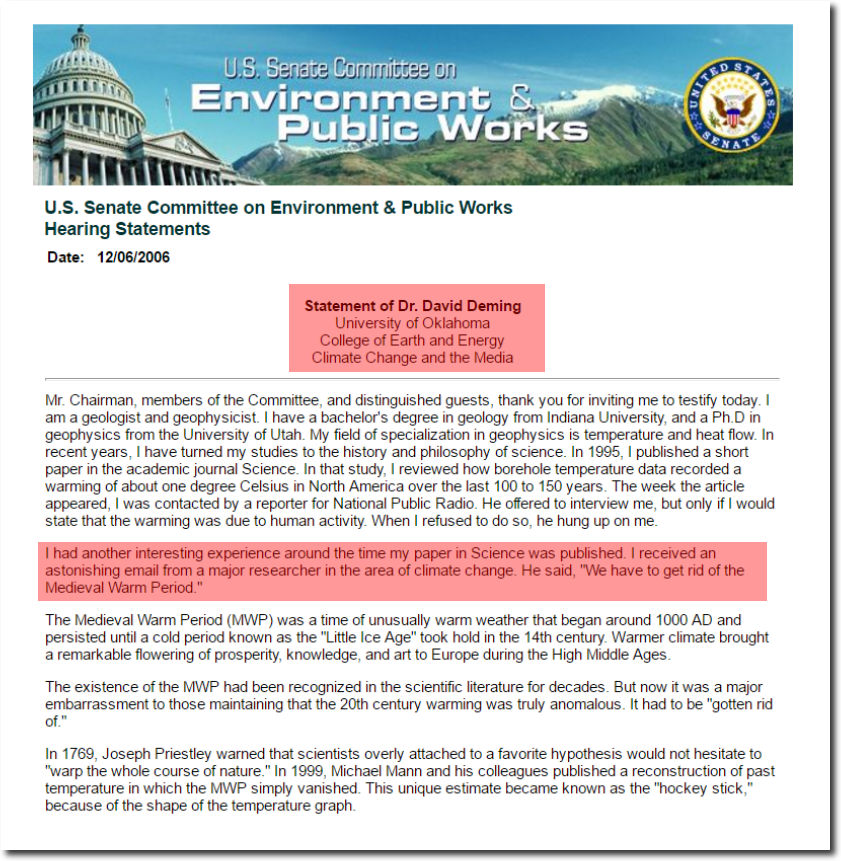 Finally, the more recent temperature record released to the public is seen from 2001 and on: Are there any differences between the earlier articles, graphs and charts and the most recent version? Are they important?
9. Two of the atmospheric scientists (who are climatologists/meteorologists/professors) that were even featured in the Climate Hustle film recently went through this:

Was there any mention of similar occurrences in the film(s)?
10. Nowadays many people attempt quick and convenient research by going online. This is done to gauge the validity of a topic one may have little to no prior knowledge about. One extremely popular resource for a wealth of information is Wikipedia. Many people form their opinions based on resources such as this without looking further. Some even decide whether a topic is worth pursuing or a movie worth viewing based on their “research” through this medium. Please check out the Wikipedia pages for both of the contrasting films you have seen:

https://simple.wikipedia.org/wiki/An_Inconvenient_Truth (Links to an external site.)

https://en.wikipedia.org/wiki/Climate_Hustle (Links to an external site.)

11. What has happened to the polar bears in the Arctic over the last nearly 60 years?

12. How does this video relate to our lab manual exercise from last week and the one from this week? Is there agreement? Is there disagreement?

ORDER NOW
× How can I help you?